Relentless resilience by an author and runner 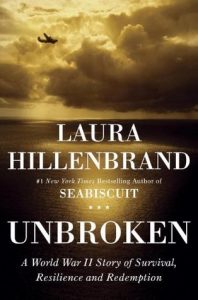 Resilience comes in many different forms. Whether it’s enduring an unexpected tragedy, trauma, or a change in circumstance, the ability to cope with stress and adversity can bring about a new and lifelong inner-strength.

The story of Louis Zamperini is so compelling that when reading it I asked myself if it was a true story or made up by some sort of literary genius! Unbroken, by Laura Hillenbrand, describes the life journey of a man that was not just an ambitious sportsman, but someone who had more adversity forced upon him than most humans could tolerate.

Zamperini, was born in the USA to Italian immigrants. In the 1920s he was a juvenile delinquent. He then rose to become a record-breaking runner and member of the 1936 Olympic team in Berlin (where New Zealand’s Jack Lovelock won Gold in the 1500m).

After Zamperini’s Olympic experience (including meeting Adolph Hitler, and climbing a flagpole to steal one of his personal flags), World War II began. While Zamperini could well have been the first to break the four-minute mile barrier, he instead enlisted in the US Army Air Force, eventually becoming a bombardier on the new B-24 bombers. During a time when nearly as many men died during training as there were deaths in combat, he ‘finally saw his fair share of action’.

This is where his story catapults skywards in resilience. During one mission, he and his crew were shot down over the Pacific, setting an unsought record of 47 days survival in a raft at sea. When rescue finally came, it was by the Japanese enemy. Because he refused to broadcast anti-American propaganda, Zamperini was taken to one of their worst prison camps.

The weeks, months, then years that Zamperini was held captive, and while the public believed him to be dead, his resolve to survive was tested to the limit. Hillenbrand’s ability to describe Zamperini’s mindset, relationship with other captives and guards, and how his family were coping, is brilliant. If the book didn’t provide such a robust set of references at the back, you’d easily believe the author was writing fiction.

Not all stories of resilience are equal. To me, the most inspiring are those people who must rely on their inner-strength when difficult circumstances are forced upon them – rather than people actively choosing to take on difficult situations (like walking to the South Pole).

Hillenbrand herself is an incredible example of this. Due to chronic fatigue syndrome, a debilitating medical condition, all of Hillenbrand’s research and writing is done from her home rather than in face-to-face meetings with her sources. Zamperini was so moved by her courage that he sent her one of his Purple Hearts in recognition.

Universal Studios bought the rights to Unbroken in early 2011 and eventually shot a film about Zamperini. They started this process in 1957 when they bought the rights to an earlier book. Zamperini has been quoted as saying “they better hurry if they expect me to be a consultant”. After all, he was born in January 1917.